Michele Grassadonia is a fervent environmentalist. A long time ago, he moved from Palermo to Siena, its ideal city. He has carried out an experiment in his flat for longer than one year: living in full self-sufficiency, without running water or electricity. On a rainy night, Michele gets caught up in a series of confusing and mysterious events. From this moment on, his joyful experience in the ideal city starts to waver. 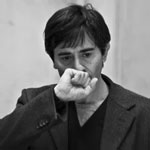 Luigi Lo Cascio is born in Palermo and studied acting at the Silvio D’Amico National Academy of Dramatic Arts. His first role for the cinema was in Marco Tullio Giordana’s I cento passi (One Hundred Steps, 2000). He worked again with this director in 2003 for La meglio gioventù (The Best of Youth). In theatre, he wrote and played the monologue Nella tana (In the Burrow, 2005), took part in Luca Ronconi’s Il silenzio dei comunisti (The Communists’ Silence, 2006) and directed La caccia (The Hunt, 2008). He played roles in films by directors such Giuseppe Piccioni, Cristina Comencini, Roberta Torre, Pupi Avati, Giuseppe Tornatore e Mario Martone.