Xiao He is a free-spirited teacher working in a village in Northern China. To her, learning is possible only if one experiences the pleasure of discovering something new, and it does not mean abiding by the same old rules. Her students love her teachings, but her colleagues do not like her rebellious attitude. When they find out that Xiao He’s lover is a married man, she is forced to leave the school. She decides to move to Beijing, where she thinks she can let out her creativity working as a journalist. However, her innate sense of freedom put her into trouble again, and she is forced to work as a waitress to make a living. A rich man falling in love with her may be a possible way out, but his love is not returned by Xiao He. When she decides to accept him anyway, a policeman who she had previously turn down will try to hamper her dreams. It is time for choices: to keep on suffering, or to betray one’s ideals to change life. 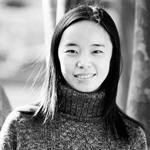 Liu Shu, born in the city of Jining in the Shandong province, is a Chinese director, scriptwriter and producer. She graduated at the Shandong Normal University majoring in Arts. She worked as a journalist for CCTV and China Beijing TV Station. She is devoted to independent filmmaking since 2007. Xiao He is her debut feature.