In Casablanca, the young Abdellah spends his days at home, living a relationship of conflicts and complicity with his father. In the city streets, he has occasional sexual intercourses with men. During a holiday, his older and venerated brother Slimane abandons him. Ten years later. Abdellah lives with his Swiss lover, Jean. He leaves Morocco and goes to Geneva, where he decides to break up and to start a new life alone. He takes shelter in a house of the Salvation Army, where a Moroccan man sings a song of his idol Abdel Halim Hafez for him. 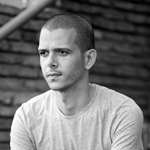 Salé, Morocco, thirty-nine years old, Abdellah Taïa is the first Moroccan and Arab writer to have openly come out about his homosexuality. He is the author of novels translated into several languages, including Une mélancolie árabe (2008), Le jour du roi (Prix de Flore 2010) e Infidèles (2010). L’armée du salut, adapted from his eponymous novel, is his first full-length feature film.