Paolo, 40 years old, lives in a small Friulian town close to the north-eastern border. Unreliable and with a passion for good wine, he spends his days at the local tavern and stubbornly stalks his ex-wife. One day, unexpectedly, he meets his nephew Zoran, an awkward 16-year-old boy grown up in the Slovenian mountains. Reluctantly, Paolo has to take care of him, but he soon discovers Zoran’s bizarre gift: he is phenomenal master of darts. Paolo thinks this is the right chance to take revenge on the world. But will everything be so easy? 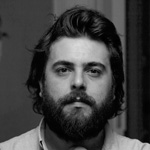 He was born in Gorizia in 1977. In 2008 he graduated in Film Direction at the Centro Sperimentale di Cinematografia in Rome and in 2011 in Acting from the Civica Accademia d’Arte Drammatica “Nino Pepe” of Udine. His shorts won awards all over the world. He worked as director for TV programmes and commercials. He was the co-protagonist of Claudio Cupellini’s Lezioni di cioccolato (Lessons in Chocolate, 2007) and served as coproducer, assistant director and actor in Alfredo Covelli’s Nonna si deve asciugare (Grandma Must Get Dry, 2011). He is actually working on his second feature and, in his free time, works in the family vineyard.