English title / The Art of Happiness

Production / Luciano Stella (Big Sur srl) in collaboration with Mad Entertainment, Rai Cinema and Cinecittà Luce, in association with Aleteia Communication and Romagnosi 2000 in accordance with the Tax Credit law

Two brothers. Two continents. Two lives. One single soul. Under a gloomy sky, between apocalyptic premonitions in a Naples at its utmost decay, Sergio, a taxi driver, receives a shocking news. Nothing will be the same as before. Now Sergio looks himself in the mirror and what he sees is a forty-year-old man who has turned his back on music and got lost in the limbo of his city. While a storm is raging outside, a crowd of memories, hopes, regrets and presences begins to populate his cab. Sooner or later the rain will stop and the sky will open up again. And the end will come. Or the music will be back. 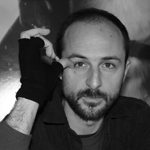 He is a Neapolitan director and author. He is the artistic director of the animated tv programme Il principe di Sansereno e il mistero dell’uovo di Virgilio (The Sansereno Prince and the Mystery of Virgilio’s Egg), produced by Rai Fiction. He directed several award-winning animated shorts, including Va’, Looking Death Window and Again. He directed animated videoclips for ‘O sciore e ‘o viento by Foja, La paura dei Bisca and Kanzone su Londra by 24 grana. He is the author of comics such as A Skeleton Story, Bye bye jazz, Zero or One and Ark. L’arte della felicità is his debut feature.