Ximena is an illiterate woman in her fifties, who has learned to live on her own to keep her illiteracy as a secret. Jackeline, is a young unemployed elementary school teacher, who tries to convince Ximena to take reading classes. Persuading her proves to be an almost impossible task, till one day, Jackeline finds something Ximena has been keeping as her only treasure since she was a child: a letter Ximena’s father left when he abandoned her many years before. Thus, the two women embark on a learning journey where they discover that there are many ways of being illiterate, and that not knowing how to read is just one of them. 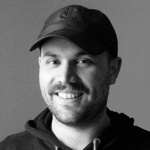 Born in Santiago in 1984. He is a Film Direction and Screenplay Graduate from Chile’s Arcis University. For the last 10 years, he has simultaneously developed a career as professional magician, having participated in several national and international events. He has written and directed music videos, shorts, and TV series. He is currently working on his second film: Sed, la historia detrás del fraude. Las analfabetas (Illiterate) is his debut feature.