Maria Fux is an elderly Argentinian dancer. In her studio in the centre of Buenos Aires, she
welcomes dancers from all walks of life, including women and men with physical and mental impairments, and arranges integrated dance groups. After having experimented and taught her method throughout her entire life – based on the perception of inner rhythms and the symbiosis with music – Maria Fux is now dealing with one last student, possibly the most difficult one: herself. We all have limits that we can acknowledge and finally overcome. At the age of 90, Maria fights her ultimate battle against the limits of her own body. 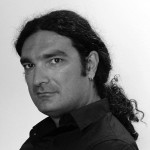 Ivan Gergolet was born in Monfalcone in 1977. He graduated in Performing Arts from the University of Bologna and started working in the film industry in 1995. He directed documentary shorts (Akropolis, 2005; Making Archeo Films, 2011), short fiction films (Quando il fuoco si spegne, 2005; Polvere, 2009; La collezione di Medea, 2009; Ouverture, 2010), institutional and corporate videos. His works focus particularly on the relation between memory and repression. He has been working as assistant director, production assistant and production manager for several national and international projects. Dancing with Maria is his first full-length documentary.