12
Slideshow With jQuery by WOWSlider.com v2.1.3

Amir and Sara are a young couple on their way to Melbourne to continue their studies. However, just a few hours before the departure of their flight, they are unintentionally involved in a tragic event. 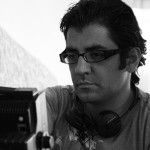