Rose reckons a family is like a constellation – all connected, hanging up there, in the infinite.  Stars can feel each other, even if some died millions of years ago.  Even if they’re light years apart. Over the course of one long day, as mum wills her children closer, Rose’s fractured family pulls back into its constellation. Aching to reconnect they find themselves facing the true implications of their own devastating, inherited legacy. 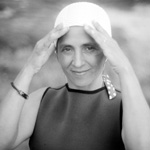 Self-taught photographer and filmmaker, Esther has directed low fi music videos, sex education films, corporates videos for and about randy sailors as well as Channel 4 dramas and the BBC’s Wallander starring Kenneth Branagh. Her captivating cinema stories tell of lost souls, tragic lovers, limbo lives and daydreamers, all found in her self-penned short, the multi awarded and BAFTA winning September. Working with the Cube Cinema collective, Esther mobilises a community cinema for children affected by the aftermath of the Haiti and Nepal earthquakes.