A group of blind women talk and tell stories, showing their own way of seeing through sensory memory, singing and dreams: an imaginary landscape bordering darkness and reconstructed through their voices. 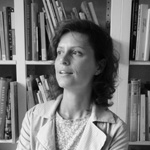 Fatima Bianchi was born in 1981. She is a documentary film maker and a video-artist. She lives and works between in Milan and Marseille. From 2006 her work has been shown in many film festival and art galleries among which Visions du Réel, Cinema Vérité Iran, Les rencontres International, Premio Sergio Amidei, la Fondazione Merz of Turin, Casa Testori. With her short Tyndall (30′) she won the Perspective Prize at the 2014 Filmmaker Festival.