Denise is a teenager torn apart from the arms of her father, with whom she has a consensual sexual relation. The girl is sent to a special center and given to the care of people who want to protect her, despite she doesn’t feel the need to. She closes herself up, knowing that she will never be able to be understood. 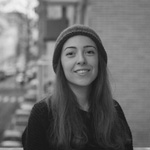 Rossella Inglese graduated in Digital Filmmaking. In 2012 she founds the production company Fedra Film and directs commercials and documentaries. In 2013, under the supervision of Mirco Locatelli, she directs her first short, Sara, followed by Alternate World (2015) and Vanilla. At the center of her shorts we find adolescent female characters who deal with their own sexuality.