Are We Not Cats

Original title / Are We Not Cats

After losing his job, his girlfriend, and his apartment in a single day, a young man attempts to restart his life, but is diverted when he meets a woman who shares his strangest habit, an inclination for eating hair. 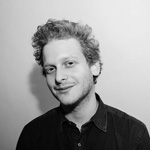 Xander Robin is a writer, director and editor living in New York City. He received a BFA at the Florida State University College of Motion Picture Arts. His award-winning short films have played at dozens of film festivals worldwide. Are We Not Cats is his debut feature film.