Milano 2, a residential neighbourhood on the outskirts of Milan. Built between 1970 and 1979 as a utopic city, it was Silvio Berlusconi’s first ambitious urban project. An area that today, at first glance could look like an anonymous suburb was once the laboratory for the imposition of a new lifestyle, which in the decades of “Berlusconism” spread at a national level and radically transformed the Italian culture. 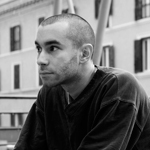 Riccardo Giacconi (1985) studied visual arts at the IUAV Venice, the UWE in Bristol and the New York University. In 2016 he won the video production prize ArteVisione awarded by Sky Arte and Careof. He presented his works in several festivals, including New York, Rotterdam, Rome, Torino, FID Marseille (Grand Prix in the 2015 international competition) and Milan Filmmaker Festival (2015 “Prospettive” Award).