Ciccio, so called “O’ Pazz” (the Mad Man) and Ciruzzo, so called “Pesce Bello” (Beautiful Fish) are two bloody murderers that smear violence onto the weak. In an atmosphere of supremacy between the miserable, new enemies, apparently inoffensive, seem to start gaining space. Pushed by the alienation of the place, the two criminals start to develop a paranoia even towards two helpless animals: Severino the donkey and Piero the boar. The final showdown is near. 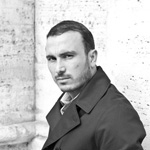 Francesco Di Leva (1978) was born Naples. He graduated in dramatic arts and worked in theatre with Luca De Filippo, Mario Martone and Francesco Rosi, amongst others. He acted in several TV series. On the big screen, he has worked with Italian directors Vincenzo Marra (Vento di terra), Francesco Patierno (Pater familias) and Claudio Cupellini (Una vita tranquilla – nominated for the David di Donatello in 2010 as Best Supporting Actor). MalaMènti is his debut film as a director.