English title / Nausicaa – The Other Odyssey

Nausicaa, a young princess eager to explore the world, meets Ulysses and is fascinated by his stories. After seducing her, the man abandons her. Nausicaa decides to go and look for him retracing the steps of his journey and begins to find out the truth, often petty, hidden in his incredible stories. Her voyage will then become a growth path through which she will become a woman. 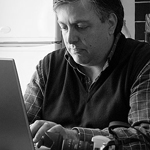 Bepi Vigna (1957) graduated in Law but soon abandoned the profession to become a writer of comic books and graphic novels. He is one of the creators of Nathan Never and Legs Weaver (Sergio Bonelli Publishing House). He worked as a writer in radio and television, as well as authoring theatre plays, novels and scripts. He directed commercials for advertising, documentaries and short films. He is the artistic director of the Nues Festival – Fumetti & Cartoni nel Mediterraneo.