Unusually close mother Lyn and daughter Iona are excited for their new life in a new town. After a tricky start, Iona becomes ‘best friends’ with Keely, Stacey, and Chelsea. Used to being Iona’s best friend herself, Lyn feels left out, so she also makes friends with Belinda, her neighbour. As much as Lyn and Iona pretend with each other that things are great, things are not going that well for either of them. Both mother and daughter hide behind fantasies and lies. When Lyn understands what is really going on with Iona, she figures out a way to punish her friends and keep Iona safe by her side … forever. 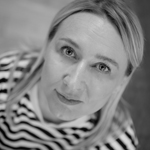 Deborah Haywood (1970) was selected for Screen International’s “UK Stars of Tomorrow” in 2007, following her first short, Lady Margaret. She has written and directed a number of short films all shot in and around her home town of Swadlincote (England). She has been nominated for a British Independent Film Award (BIFA) and won Best Short at Soho Rushes Short Film Festival for SIS. Pin Cushion is her debut feature film and has been supported by the British Film Institute.