The Crater is a land of underdogs, indistinct space, constant noise. Rosario is a street vendor, a gitane of village fairs, who gives away soft toys to whoever draws a winning number. The war he has declared against his own destiny has the immature and indolent body of his thirteen-year-old daughter: Sharon is pretty and can sing, and in this hotbed of stopgaps and desperate living, she’s his weapon for survival. But success becomes an obsession, and talent becomes a punishment. 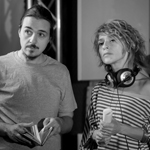 Luca Bellino (1978) and Silvia Luzi (1976) have directed the documentaries La minaccia (The Threat, 2008) and Dell’arte della guerra (On the Art of War, 2012). As directors, they received several international awards. They have founded together Tfilm Production Company. Crater is their first feature film.