A dense and foggy voyage throughout the shadow and light spaces of human existence. A descent to the dark side, paranoid and hostile, which affects the life of a limited group of people. A drifting world in which the presence of the US military base is the main cause of feelings of anxiety in the characters, triggering reactions that influence their lifestyle. The camera moves from a technologically advanced humanity to the intimacy of their homes, marked by existential questions. 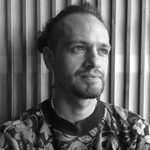 Luca Capponi (1988) founds a production company of independent cinema and shoots his first short films (Un matrimonio in bianco, Dilthy Maddening Race, Looking for Odisseo, Searcing for Ou(r)sman) during his college years. After graduating from Cinema, Television and Multimedia Production in Bologna, he collaborates with the Human Rights Nights Festival as member of the selection committee. He continues his studies at the Centro Sperimentale di Cinematografia in Palermo (Sicily).