English Title / Gagarin, I Will Miss You

A man and a woman live as the survivors after the extinction of the species. Pushed by the desire of elsewhere, the man takes refuge in his imagination. He visits abandoned villages, picks up junk and projects improbable flying machines. The woman observes him from afar. At least until something falls from the sky and bursts into their lives. An unexpected guest that will force them to interrogate themselves about their identity, reality, desire and about the very act of imagining. 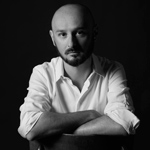 Domenico De Orsi (1978) debuts in the audio-visual field in 2001, co-directing with Giuseppe Sansonna his first short film La Quiete – presented out of competition at the Torino Film Festival and awarded a special mention at the DAMS Award in Bologna. After graduating in Film Criticism and Semiology, he starts serving as editor for directors Angelo Amoroso d’Aragone (Io e la mia sedia) and Giuseppe Sansonna (Due o tre cose che so su di lui, The Cuban Hablet – Storia di Tomas Milian). In 2012, he directs his second short film, Inassenza, presented at several national and international film festivals. Since 2013, he directs the TV show “Fuori Quadro”, by art critic Achille Bonito Oliva (RAI3). In 2017, he founds the production and post-production company Purple Neon Lights, that produces his following short films Sete rimane sete and Gagarin, mi mancherai (Gagarin, I will miss you).