Gemma and Marcello are about to get married. They have looked forward to this moment for so long. The ceremony is about to begin and they are overwhelmed with emotions, fears and expectations. As every couple, they support each other and imagine their future together, promising eternal love. But they are not like every other couple about to get married: Gemma and Marcello are two sugar paste wedding cake toppers. 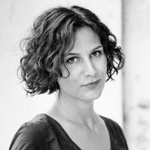 Laura Luchetti shot several short films awarded in many international festivals, as well as video-clips and advertising. She wrote and directed two theater plays connected to classical music (Il giardino del maestro with Alessio Boni and the adaptation of Histoire du Soldat with Andrea Bosca). She directed and produced a documentary for Channel Four and Miramax on English director Athony Minghella. In 2014 in the US, she was part of the Consenses Art International Exhibition with her first video installation Searching. Her first long-feature film Febbre da Fieno was selected and awarded in important international festivals. Her first stop motion animation project Bagni was nominated for the Nastri d’Argento awards in 2016 and was selected and awarded in numerous international festivals. Fiore Gemello, her second feature film was selected at l’Atelier of the Cannes Film Festival in 2015 and at the Sundance Screenwriters Lab 2015, and is now in post-production.