Yasmin, a Tunisian journalism student, and her two male friends set out on a university assignment to solve the cold case of Mongia, a woman found mutilated 25 years ago, now imprisoned in an asylum and suspected of witchcraft. As they pursue their investigation, the three friends stumble into the archaic and ominous world of Dachra, an isolated countryside compound filled with goats, silent women, mysterious drying meat and steaming pots. They are welcomed to stay overnight by the jovial yet menacing cult leader, but when Yasmin discovers Dachra’s secrets, she must escape before she is consumed. 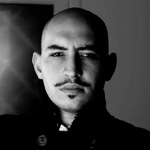 Abdelhamid Bouchnak (1984) studied at the Ecole Supérieure de l’Audiovisuel et du Cinéma E.S.A.C. in Gammarth and graduated in 2008 with the short film Miroir. In the same year, he won the prize for Best Young Director at the International Film Festival in Carthage and moved to Montreal to complete a Master’s degree in film studies. Since 2012, he has produced and directed video clips, web series and short films. Dachra is his first feature film.