Adnan is a Sudanese revolutionary who is considered a war hero. His love for his AK47 rifle is equalled only by his feelings for Lina, his long-suffering sweetheart. When Adnan is late to return to his military unit after his leave, army commander Blues launches a kasha: the rounding up and arresting of truant soldiers. Adnan is caught-off guard and makes a run for it with his friend Absi. The two unlikely friends plot ways to reunite Adnan with his gun – and with Lina – while avoiding their fellow soldiers. Through a series of wry and humorous incidents over 24 hours, we explore life and ideology in rebel-held areas of Sudan. 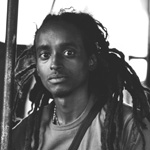 hajooj kuka (1976) is Sudanese. His 2014 feature documentary Beats of the Antonov premiered at the Toronto International Film Festival and won the People’s Choice Documentary Award. It was broadcast on POV, the PBS television series featuring independent nonfiction films, and has been selected at hundreds of festivals worldwide, collecting several awards. hajooj also trains and works with young filmmakers in Sudan.