Summer 1989, East Germany. Adam works as a tailor, Evelyn as a waitress. They are planning a vacation together when Evelyn finds out that Adam is cheating on her and decides to leave for the holiday on her own. She travels to Hungary, trailed by Adam. As the border with Austria falls, everything changes in Hungary. The frontiers are open, as the new possibilities for Adam and Evelyn to decide in which world – Eastern or Western – they want to build a happy life. Adam und Evelyn is based on the homonymous novel by Ingo Schulze, translated in more than ten languages. 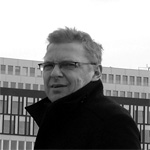 Andreas Goldstein (1964) was born in East Berlin, where he trained as a composer and attended cultural and drama studies at the Humboldt-Universität. Later on, he attended the Film and Television Academy “Konrad Wolf” in Potsdam-Babelsberg and studied directing. He had his first experience as assistant director with Peter Voigt. He worked as a freelance producer for Next Film (Laurens Straub) until 2008, when he founded Oktoberfilm GbR, together with Susanne Binninger. Since then, he has been working as a producer and author, occasionally also as a writer of texts on film theory and criticism.