In the early 90s, Isabella was eighteen years old and she was a star. She released an album that had a lot of success and for a whole summer, it was on all the radios and television channels. After that, nothing. More than twenty years later, she is still singing those same songs in small town bars with her son Bruno, a guitar player. It is because of him that her career stopped, or at least this is what she tells herself. Bruno and Isabella seem more like brother and sister rather than mother and son. They are connected through a sometimes rather morbid relationship, united against all. This connection is broken when Bruno meets Arianna, the lead singer of a rock band who asks him to join her band. 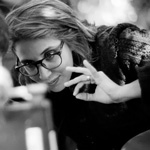 Letizia Lamartire (1987) graduated from both the Conservatory in music and from the Accademia dello Spettacolo UNIKA in Bari, in acting. She then went on studying directing at the Centro Sperimentale di Cinematografia in Rome. Her graduation short film Piccole italiane (Little Italian Girls) had its world premiere at the 32nd Venice International Film Critics’ Week. We’ll Be Young and Beautiful is her first feature film.