M explores the relationship between sexuality and death, which appear to be at opposite poles, but in fact, they merge in all of us, disguising the fear of death or the desire to die, the world of Eros. 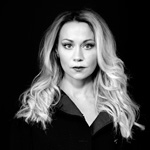 Anna Eriksson (1977) spent most of her childhood and teenage years traveling around the world and, from early age, she studied music and singing. After graduating, she recorded her first album, which instantly became a huge hit in Finland. She has recorded ten albums since, four of which she wrote and produced. She has won many awards, including two Emma prizes (the Finnish Grammy) and one Teosto Prize, one of the major art awards in the Nordic countries. In 2013, she put her musical career on hold to start working on her first feature film, M.