On a ferry travelling towards Lampedusa, we find a teenager on his first day of work as a gravedigger and a boy on his first mission as a diver. They do not know each other, but when they will set foot on the island, both their lives will change forever: one has to retrieve the bodies of drowned shipwreck victims, the other one has to bury them. A sort of dance between life and death, innocence and its loss. 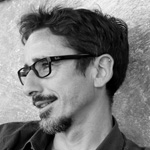 Alessandro Di Gregorio (1974) is an Italian screenwriter and documentary filmmaker. After his first experiences in writing for the TV series “Stiamo bene insieme”, he becomes assistant director. He then collaborates with Filmmaster by directing TV ads and other audio-visual products. His first documentary, 8744 wins several prizes and is acquired by History Channel. Since 2006, he collaborates with different production companies and directs programs and documentaries for leading Italian TV networks.