Amidst the struggle of survival in a big city, a red rose brings together three tales of impossible loves. Love between an unavailable girl and boy. Love between two women. Love of an entire city for its Bollywood stars. 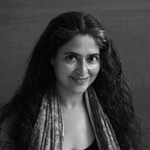 Gitanjali Rao (1971), a self-taught animator and filmmaker, emerged into the international stage with her animated short Printed Rainbow which premiered in Cannes Critics’ Week in 2006 and went on to win 25 awards. Her body of work includes animated commercials, pre-production for animated features, logo-motions as well as graphic novels and illustrated stories. She is also an award-winning actress on stage and in films. Bombay Rose, a labour of love painted frame by frame and made over six years, is her debut feature.