English Title / All This Victory

Lebanon, July 2006. War is raging between Hezbollah and Israel. During a 24h ceasefire, Marwan heads out in search of his father who refused to leave his Southern village. As the ceasefire is quickly broken, Marwan finds himself under the rain of bombs and takes shelter in a house with a group of elders. Suddenly, a group of Israeli soldiers enter the first floor. Trapped in the house and hostages of their own fears, the next three days will see the situation spiral out of control. 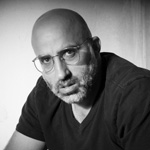 Ahmad Ghossein (1981), is a filmmaker and video artist. He directed several documentaries, short films and videos including Operation Nb… (Best Director Prize at Busan Film Festival 2004), My Father is Still a Communist (Moma, Berlinale, Best Short Film at Tribeca 2011) and The Fourth Stage (Berlinale Forum Expanded 2016). He co-directed White Noise with Lucie La Chimia, a short that opened the Directors’ Fortnight in 2017. All This Victory is his first feature length film.