In a cheap brothel at the foothills of an Athenian fortress, a man recounts the magnificent events of his life. His search for love and glory is retold and relived by many: a prostitute with an unredeemable past, a gangster haunted by bad luck, an icon painter who has no faith… In one of the stories, the man finds his riches, in another he becomes a vagabond prophet, in yet another he returns home to his wife. Memories betray him, but he knows for sure that in one of these lives, he will be killed. 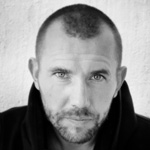 Mantas Kvedaravičius (1976) teaches Visual Culture and lives between Athens and Vilnius. His previous films Barzakh and Mariupolis have explored dreams and death, and art forms and warfare, respectively. The films have premiered at Berlinale and have been shown and awarded worldwide. He holds a PhD in Social Anthropology from the University of Cambridge and writes on aesthetics, materiality, and affect. His first feature film Parthenon on body and memory comes from a long-term research in Odessa, Istanbul and Athens.