Chile, 1970. During a night of heavy drinking, Jaime, a lonely 20-year-old young man, stabs his best friend in what seems a passion outburst. Sentenced to prison, he meets “The Stallion”, an older and respected man in whom he finds protection, and from whom he learns about love and loyalty. Behind bars, Jaime becomes “The Prince”. But as their relationship grows stronger, “The Stallion” faces the violent power struggles within the prison. 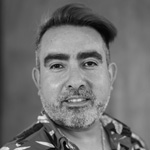 Sebastián Muñoz (1973) graduated from the Cinema School of the Arcis University and has been working as a production designer for some of the most significant films in contemporary Chilean cinema. In 1996 he shot his first short film Happiness and in 1997 Good Luck. Based on a novel by Mario Cruz (Elías O. Martínez), El Principe is his first feature film.