In a small, forgotten town surrounded by tree-covered mountains lives a small boy and his mother. Traditional life in the town has been uprooted ever since it got caught in the crossfire of the war between the military and the cartels. With few opportunities for work and not enough money to move somewhere else, the mother cultivates marijuana for the cartels. One day, she does not return from work. Struck with grief, the grandmother tells the little boy to go into the forest and pray to the sun, the wind, and the water so that they will return his mother unharmed. As the soldiers arrive and the villagers prepare for their last stand, the awesome power of nature manifests itself. 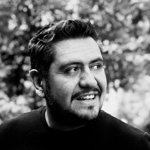 Joshua Gil (1976) has a Masters Degree in Cinematography by the School of Cinema and Audiovisual of Catalonia (ESCAC) in Barcelona Spain. Gil began his professional career in the photography department of the film Japón by Carlos Reygadas. Subsequently developed as a DoP in short films, feature films and documentaries while deepening his studies abroad with filmmakers such as Patricio Guzmán and The Quay Brothers. In 2007 he began his career as director of documentaries, commercials and television series. In 2015 he directed his first feature film La Maldad selected at the 65th Berlinale.