A retired teacher is sitting at a table outside a bar; it’s a beautiful sunny day. The waiter brings him breakfast. Soon after a young man arrives and the teacher invites him to sit, he was waiting for him. He is dark skinned. He comes from Mali. Well dressed, serene, ready for the “game” that the teacher is playing. It’s a puzzle game where one wins when completing a crossword. But there is a variable that makes this game impossible: guessing the solutions before the question is made. Nevertheless, the young man finishes the game. Or almost… 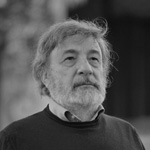 Gianni Amelio (1945) assistant of Vittorio De Seta, started his career in the 70s as a director for TV films (La fine del gioco, La città del sole, La morte al lavoro, Il piccolo Archimede). He debuts in cinema with Blow to the Heart (1982) presented in competition at the Venice International Film Festival. His following films, I ragazzi di via Panisperna (1988), Open Doors (1990), The Stolen Children (1992) highlighted his particular attention to history, labor related issues and the relationships between generations, which will be almost a constant theme in his next works. In 1994 Amelio directs Lamerica, a film entirely shot in post-Communist Albania, where he confirms a style with a strong realistic impact, but open to an epic vision together with influences intelligently absorbed from Italian classical cinema. With the success of The Way We Laughed (1998) he intertwines public experience and personal memory by representing the internal migration from the south to the north of Italy in the 1950s. The film won the Golden Lion at the Venice International Film Festival that same year. In 2004 Amelio directs The Keys to the House, the story of the relationship between a young father and his handicapped son, filmed entirely in Berlin. In 2006 he directs The Missing Star, the story of an Italian worker that goes from Shanghai to Mongolia looking for a piece of “his” factory bought from the Chinese. In 2010 Amelio turns to Algeria to work on Albert Camus childhood the way the author intended in his unfinished book, The First Man. The film wins the Critics’ Award at the Toronto International Film Festival. In 2013 Intrepid: A Lonely Hero was presented in competition in Venice and in 2017 Amelio directed Holding Hands and the short film Someone Else’s Home. Gianni Amelio directed for four years the Torino Film festival and wrote books such as Il vizio del cinema, Un film che si chiama desiderio, L’ora di regia. He also wrote two novels, Politeama Mondadori, 2016 and Padre quotidiano, Mondadori, 2018. He is the only Italian director that won three times the EFA award. He is currently teaching at the Centro Sperimentale di Cinematografia in Rome.