A woman reaches an abandoned villa that emerges at the border between civilized society and the savage woods from which she just appeared, bare feet and dirty with mud. The woman arrives to a shopping mall. She wanders in the big and empty parking lots following a man who she seems to want to ambush. From her gestures something furious and menacing emerges. Everything seems to draw back to those woods, a place that hides the true nature of her actions. 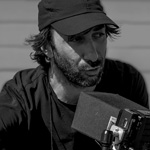 Andrea Corsini (1980) studied in Berlin in the early 2000s. He directed several music video-clips among which Francesco Renga, F. Quintale, Adam Carpet, A Copy for Collapse (selected for the Trenton Art All Night) and Jules Not Jude (winner of the People Choice a Ibiza Music Video Award). In 2011 he wrote and directed the short film Non nel mio giardino with Paolo Briguglia and Giorgio Carminati. In 2018 the documentary Sociatas mortis was presented at the Filmmaker International Film Festival and at the MiMo Triennale Di Milano. He is currently developing his first feature length film Sembra sapere di me, finalist at the development program of the Milano Film Network InProgress.