Thomas is a sound catcher, constantly hunting them. When his best friend betrays him by disappearing with Violet, his inspiring muse, Thomas looses a part of himself: the hearing from his left ear. A trauma that divides his new life in two. 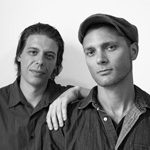 Lorenzo Landi (1984) graduated in History of Cinema and Film Analysis at the Università La Sapienza of Rome. He specialized in screenplay at the RAI Script course and then graduated in film directing at the Centre d’Estudis Cinematografics de Catalunya in Barcelona and at the Bande à Part cinema school. Michelangelo Mellony (1981) graduated in Political Science at the Universidad de Buenos Aires and in Musical Production at the Sonica School in Buenos Aires. He moved to Barcelona to continue his studies as a music producer at the Beatlabs School and worked as an author, composer and video maker. Monologue is the first short film as directors.