Roberta is a nine year old girl who wants to enjoy the last days of summer on the beach playing with her friends, while her father Donato forces her to stay at home to help with household chores. The distance between the two seems unbridgeable, but the discovery that Donato is much more fragile than it seems, will lead them to appreciate their time together. 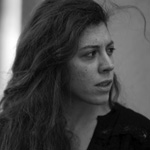 Veronica Spedicati (1992) graduated at the Dams Faculty of Roma Tre University with an experimental thesis about cinema made by deaf people. In 2013 she got a scholarship to study at the Remap Department in the UCLA of Los Angeles. In 2015 she shot the documentary La Prima, focused on the story of a deaf girl. After working as a video maker and in several sets as an assistant director, she went back to school at the Centro Sperimentale di Cinematografia of Rome. In 2018 her short film Il giorno della Patata was selected in competition at the Rome Film Festival in the section Alice nella Città.