English Title / The Oceans Are The Real Continents

Having Cuba as a background, decadent and in crisis, in a black-and-white lacerated by the Caraibic swinging rain, Alex and Edith, a couple in their 30s, live their love story made of small daily gestures, stories from the past, nostalgia, and a deep intimacy. 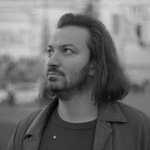 Tommaso Santambrogio (1992) directed his first short film in 2016, D’Istanti Lontani, set between Milan and Paris. He worked as an assistant director in several films, including Il Signor diavolo by Pupi Avati and Quasi Natale by Francesco Lagi. In 2018 he directed Escena Final, a short film made in collaboration with Werner Herzog in the Peruvian Amazon and presented in many festivals around the world. He is currently working on the next film by Lav Diaz in the Philippines.