Veronica is 17 years old and for a long time she has been spying from afar a life different from hers, and she chose it for herself. When she finally manages to approach Alessia, she immerses herself completely in this new world that appears to be the same and at the same time different from what she imagined. 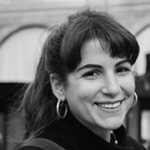 Chiara Marotta (1993) works as a director and editor of musical video-clips, commercials, short and long feature films, having received several awards. She is co-founder of the production company Lapazio Film that produced the short Quelle brutte cose, written and edited by her, awarded for the Best Technical Contribution for Editing at the 33. Venice International Film Critics’ Week and was also presented at the Sundance Film Festival in 2019.