The 50 years old Erland lives in an industrial town, works in the local paper mill, and manages with his wife a seminar about marriage problems at the Pentecostal church. Everything is fine, until his best friend Sven-Erik introduces him his wife Karin at a party. The desire between Erland and Karin is tangible, and the situation soon becomes unbearable. Then Erland suggests a “rational solution”: to face the crisis all together, living in the same house and creating a sort of temporary commune with rules of behaviour and schifts for cooking and cleaning dishes, waiting for this out-of-marriage passion to come to an end. 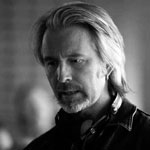 Jörgen Bergmark was born in 1964. He has worked as producer, scriptwriter and director for TV and short films, working with Bent Hamer for the script and the production of Kitchen Stories. Among his short films En kärleksaffär nominated at the Swedish Film Awards in 2003 and for the best short film at the Hollywood Film Festival.