Amanda lives in a flat offered by her father, a famous actor with whom she is in bad terms. Although she has grown up in affluence, she is now adrift without a stable job. Besides this, she has also a psychological problem: she cannot sleep alone. Every night, she looks for someone to sleep with her, but the next morning this person is felt like a burden to her. This fragile balance is further shaken when she has to assist her grandmother, once a famous actress, and now an old person facing alcoholism and Alzheimer. Granmother and granddaughter will slowly get to know each other to discover their respective human and affective spheres. 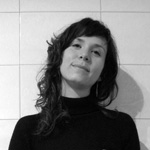 Natalia Beristain, graduated in film directing, shot a few shorts including Peces plátano (2006), that was awarded as Best Mexican Short at the Morelia Film Festival, and selected for Cannes’ Semaine de la Critique. In 2008, she founded her production company, Chamaca Films.