Chiara was only 7-year-old when she started filming her family. She was 12 when she decided to quit. That was the year when her older sister, Francesca, fell sick. It is then when the image of the “perfect family” begins to break down, to disintegrate. 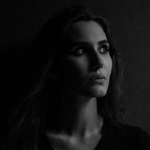 Chiara Leonardi was born in 1993. She graduated in Media Design and Multimedia Arts from the New Academy of Fine Arts in Milan, showing a considerable interest towards practices such as found footage and film archive. After having worked in the field of commercial music for Warner Music Italy, she directs her first short: the autobiographical Alice.