English title / It Was Yesterday

Giò is a 13-year-old girl living in Southern Italy. She is the head of a boys’ gang and is secretly in love with the young Paola. To win her heart, Giò is even ready to compete with her male opponents. Then, in the last day of summer, innocence ends. 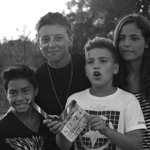 Valentina Pedicini was born in Brindisi in 1978 and graduated in Film Directing from the Scuola Zelig. Her documentaries include Mio sovversivo amor (2009), My Marlboro City (2010), and the award-winning Dal profondo (2013). Era ieri is her debut in fiction filmmaking.