Daniel is the son of African parents born in Rome. He is a police officer of the State Police Department. One day he finds out that his unit will have to clear a building where his mother and brother live. Torn between the love for his family and the loyalty to the police, Daniel will have to choose between the two and go with it until the end. 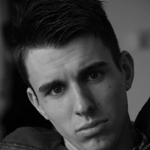 Hleb Papou (1991) was born in Belarus and lives in Italy since 2013. In 2012, his first short film The Red Forest was presented at the Short Film Corner in Cannes and awarded at the Festival Nazionale Roma FilmCorto. He graduated from the DAMS (Arts, Music and Entertainment studies) in 2014 and two years later from the Centro Sperimentale di Cinematografia (National Film School) in Rome. Il legionario is his graduation short film.