In 1943 the fascist regime forbids the production and selling of toys. Italia, a little girl educated according with the principles of the regime, decides to rebel and makes a big fuss. Her mother, afraid of repercussions, drags her to Rome to apologize to Minister Rizzi, who promulgated the law. It is the 25th of July and their small story will intertwine with history and with the end of fascism. 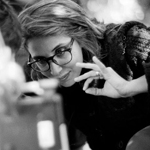 Letizia Lamartire (1987) graduated from the Conservatory in music and graduated in acting at the Accademia dello Spettacolo UNIKA in Bari. She then went on studying directing at the Centro Sperimentale di Cinematografia (National Film School). Piccole Italiane is her graduation short film. She is now writing her first feature film.