13
Slideshow With jQuery by WOWSlider.com v2.1.3

In the spring of 1988 a wild boy is found deep in the Bosnian mountains living amongst wolves. He is given the name of Haris and sent to an orphanage in Belgrade to be taken care of by Ilke. He becomes inseparable from the little Žika and slowly starts pronouncing his first words. In 1992, in the midst of war, local authorities force him to go back to Bosnia where he is given a rifle and sent to the frontline. One night, for the first time in his life, the boy makes a decision entirely of his own. 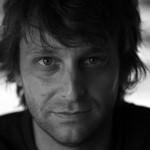 Vuk Ršumović was born in Belgrade in 1975. He studied cinema, theatre, television and radio at the Faculty of Dramatic Arts in Belgrade. He wrote screenplays for TV series, short films, animation films and documentaries. Furthermore, he is an active author of TV programmes. In 2007 he founded his own production company, BaBoon Production. Besides his commitment with cinema and television, he also collaborates with the main Serbian theatres. No One’s Child is his debut film.