Stefie, an unremarkable teenage loner, is recruited by Martin, Jean-Sé and Lea to record their daily capers with his cellphone. The four pranksters decide to set up a stunt that go beyond anything they’ve done so far… But this time, who will be the victim? A funny and cruel coming-of-age story about love, friendship, peer pressure and loss of innocence. 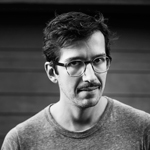 Vincent Biron was born in 1984 in a small Quebec town. He has directed four award winning shorts that have been shown in over 70 film festivals worldwide.  In 2010, Les fleurs de l’âge won best short at the Toronto International Film Festival and his latest effort, Une idée de grandeur, was selected at the 2015 Clermont-Ferrand Short Film Festival.  An avid cinephile with an eclectic appetite, Vincent also collaborates with numerous filmmakers as a cinematographer, shooting among others Denis Côté’s Bestiaire (2012). Prank is his first feature-length film.