A middle-aged lawyer works and lives alone in a dreary apartment. One cold and rainy day, a disheveled man breaks in and entrusts him with a small package. The following day, the lawyer’s apartment is ransacked and he must fight off threats to hand over the package. Neither his girlfriend nor his best friend can offer much help in solving the mystery. His best friend also happens to be a drug addict with a tendency to speak to an imaginary friend. The lawyer continues to be plagued with break-ins and unwelcome visitors, but he avoids attempts to corrupt him. When his girlfriend is stabbed to death, the lawyer’s thirst for revenge will lead him to the greediest man of all… 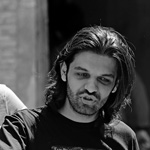 Drum is Keywan Karimi’s first feature film. Born in 1985, Karimi is an Iranian filmmaker of Kurdish origin. His short films, such as Broken Border (2012) and The Adventures of a Married Couple (2013), were presented in numerous international film festivals. Because of his documentary Writing on the City (2015), focusing on the graffitiof Tehran walls from the 1979 Islamic Revolution to the 2009 re-election of Mohamoud Ahmadinejad, Karimi was arrested and held in isolation for two weeks in December 2013. In October 2015, he was condemned to six years in prison and 223 lashes for “offending Islamic sacredness.” In February 2016, the appeal judgment confirmed all convictions but reduced the prison sentence to one year imprisonment but kept the 223 lashes. His freedom is currently in a state of limbo: he has not yet been imprisoned, but he has not been acquitted and he can no longer appeal his final sentence. His status can be considered house arrest as he is unable to travel anywhere, for example: the Venice Film Festival for the premiere of Drum. Karimi considers Yılmaz Güney (the Cannes Palme d’Or winner for 1982′s Yol and a Turkish director of Kurdish origin) as an inspirational example of a filmmaker who stood up for freedom of expression.