In Torino, a bittersweet crowd is bringing its own belongings to a pawn shop, waiting for a ransom or the final auction. Between the thousands of faces that tell the human inventory of the crisis, three stories intertwine unconsciously in the thin line of moral debt. Sandra, a young trans, in order to escape her past sells her fur coat. Her gaze will cross Stefano’s, a novice who just started working at the bank, and who drags her towards a tender obsession. Michele, a retired porter, asks for a loan to a family member, who will turn out to be fatally the wrong person to ask a favour from. 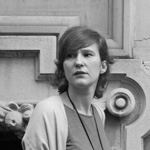 Irene Dionisio was born in 1986. She graduated in Aesthetical and Social Philosophy at the University of Torino, and did a Master degree in Documentary filmmaking directed by Daniele Segre and Marco Bellocchio, as well as a Master at IED directed by Alina Marazzi. Through the association Fluxlab, of which she is a founding member, she curates cultural and artistic projects about issues such as integration, cultural policies and gender issues. Her artistic production includes video installations and documentaries, such as Sponde. Nel sicuro sole del nord (2015), La fabbrica è piena. Tragicommedia in otto atti (2011). Le ultime cose is her first feature film.