English title / The Last of Us

With no dialogue, The Last of Us tracks a Sub-Saharan man through the desert to North Africa where he steals a boat. When it breaks down in the middle of the sea, he begins an imaginary surrealistic odyssey where he meets an older man, who might be an altered version of himself, and, in a wild landscape, rediscovers his relationship with primary nature. “A philosophical fable on being lost” (Giona Nazzaro). 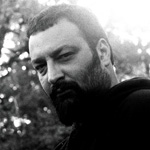 Ala Eddine Slim was born in 1982. He is co-founder of the Tunisian production company Exit Productions. He directed several short films and video-art works, including The Fall (2007), A Night Among Others (2008), The Stadium (2010) and Journal of an Important Man (2010). He co-directed the documentary Babylon, that won the Grand Prix at FID Marseille in 2012. The Last of Us is his first feature film.