Johan lives with his wife in the eastern suburb of Stockholm. Anna lives there too, with her husband and nine-year-old daughter. They do not know each other, but a car accident – which involves Johan and causes the death of the little girl – will totally devastate their lives, inexorably influencing their future, beyond all foreseeable developments. 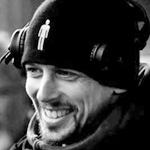 He is born in Stockholm in 1969. He directed several successful TV dramas, including De Halvt Dolda (2009) e Gynekologen I Askim (2011). Stockholm Östra is his first cinematic feature