Fiona is hired as a maid and nanny by a middle-class family living in the Ruhr region, the Bauers: a father, mother, teenager daughter dating a boy older than her and a small child. Daily life is marked by precise rules and rituals and seems to pass normally between the swimming pool, family meals, idling in the garden and short walks. Discipline is imposed and reasserted perpetually. Yet very soon the family members’ neuroses and anxieties emerge, and roles and boundaries become distorted. In particular, the mother, suffering from early menopause, takes out her frustration and rage by treating two dolls as actual newborns, while the father, who is often away on business, has a morbid interest in Fiona that becomes increasingly more evident and dangerous. 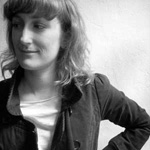 Born and raised in Bochum in the Ruhr region, she currently lives in Berlin. She studied documentary and TV journalism at the Hochschule für Fernsehen und Film in Munich. Totem is her graduation film. In 2006 she founded her production company which realised Timo Müller’s debut feature, Morscholz, winner of the Forderpreis Deutscher Film for Best Director.